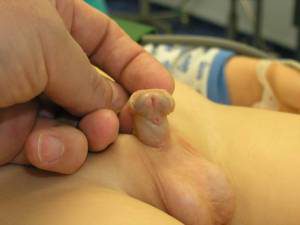 Hypospadias is a relatively common congenital malformation of male genitalia affecting between 1:200 and 1:400 males. 8% of their parents is also affected, but probable some enviromental factors play role in hypospadias epidemiology, since its frequency almost double in last decades.
Anatomically the defect consists of 3 elements – underdevelopment of urehtra, dehiscence of the prepuce and penile curvature. In more then 50% urethral orifice is located retroglanulary, about 30% on penile shaft and 20% on scrotum or perineum. Typically ventral curvature is associated with high grade hypospadias – the lower the orifice, the more distinct and relevant the bending. Real curveture should not be mistaken with fake one, which results from glanular flatening – which should be easily correctek during glanuloplasty- or relative abbundance of preputial skin, sometimes even after it is reconstructed.
Perineal and scrotal hyposapdias requires differential diagnosis with disorders of sexual differentiation in mind, especially when accompanied by impalpable testis.