Impalpable testis is a term applied to situation, when we can’t palpate a testis neither in scrotum, nor in inguinal and perineal region. Some would say “and we can’t find it with ultrasonography” – which is not absolutely reliable in this subject. Scrotal hipotrophy on ipsilateral side is often encountered – it is relevant finding. Impalpable testis can be an effect of obesity with prominent cremasteric reflex, intraabdominal location of testis, hypoplasia, dysgenesia or aplasia of testis. Sometimes it is “normal” cryptorchidism, just not carefully examined. Bilateral impalpable testis is a common finding in some syndroms of inappropriate sexual differentiation, bladder extrophy or “prune belly” syndrom.

The attitude to surgical correction of impalpabe testis is controversial. Some suregeons prefer to start with laparoscopy, wherease other would first open inguinal canal and convert to laparoscopy if no final solution is found there. Exploration of inguinal canal requires much less invasive anesthesia and leads us to final solution in 80% of cases. If it is not the case the anesthesia should be extended and we should proceed with laparascopy, so we solve the case during one procedure. I think it can be decided individually  – when I observe unilateral scrotal hipoplasia and hipertrophy of the opposite testis I would start with laparoscopy sometimes. I’ll always start with laparoscopy in case of bilateral impalpable testis.

Starting with inguinal approach we can encounter following situations:

1. migrating testis that will be fixed in scrotum with ease (often in obese boys)

2. A more or less normal testis that will not reach scrotal position. I’m against eny variants of Fowler-Stevens operation (sacrificing testicular vessels to gain lenght).  Second stage operation after 6 months will usually fix the problem.

3. A testis of impaired morphology tha will or will not reach scrotal position. I take a specimen for histological examination to facilitate further decisions and fix the testis as low as possible.

4. Dysplastic gonad or it’s remnants (“nubbin”) that we can saftely remove.

Starting with laparoscopy we can face the following situations:

3. Testicular vessels and ductus defferens “dissolving” above internal inguinal ring. We explore neighbourhood for any disconnected testicular remnants – in fact they are found extremly seldom.

4. Total absence of testicular vessels and ductus defferens. We look as high as possible, explore retrovesical space for ductus defferens – if nothing is found agenesia is confirmed. Intraabdominal testis

The most unrewarding scenario is when we fin hypoplastic or dysgenetic gonad that is to “good” to be removed. We perform two stage  orchidopexy but during puberty the gonad does not respond and finally is removed.

During puberty it is possible to place testicular prothesis in scrotum – it should be final size prothesis, so the boy should be mature enough. It can be combined with removal of testicular remnants or as a primary procedure. If patient is left with only one working testis it should be fixed (to prevent testicular torsion and other surgical diseased). Testicular prothesis should be chosen with care since many models present on the market are of poor quality, made of hard plastic – I prefer soft silicone filled ones, which mimic natural testis properly. 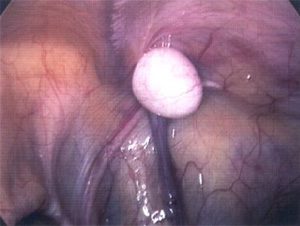